Towards the end of the 2014-16 Ebola outbreak in West Africa the American Red Cross together with its local partners extensively surveyed communities within a 15-kilometer distance of the shared borders between Guinea, Liberia, and Sierra Leone. The information from this survey continues to serve as a fireline for containment of the infection.

The maps below give an overview of the 7,200 communities surveyed. In the first map, each dot represents a community, with red representing a community that reported at least one case of Ebola during the outbreak. 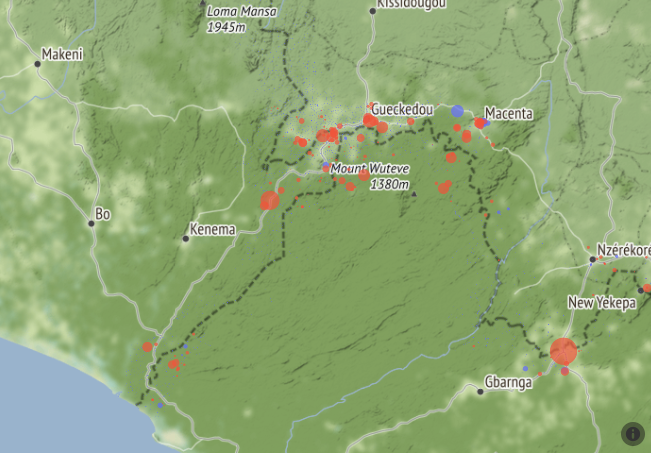 The plot to the right represents the distribution of infection probabilities. Note the right skew of the data; only 0.5% of communities surveyed had cases of Ebola infection. Even at an initial 96% "accuracy", the predictive model is insufficiently tuned to identify communities at risk. To properly adjust for the low probability of infection, the predictive threshold of the model was set to 10%. Communities identified as at risk are up to 90% unlikely to have an infect.

Adjusting the predictive threshold down to 10% greatly improves recall at the cost of model precision. Even so, for the sake of containment, efforts can be more efficiently focused on 85% fewer locations. Effectively concentrating efforts on communities with the highest risk.

After running a cleaned version the survey data through a selected model (XGBClassier), the relative predictive power of each variable was assessed and ranked according to importance. Of all the information collected in the survey, 79 factors were found to help our model accurately predict infection. Proximity was, not too surprisingly, among the top contributing factors for predicting Ebola infection. Perhaps the most interesting finding is the strong relative importance of other disasters faced by the community during the time of the outbreak. Drought, food shortages, flood, conflict, and other calamities all greatly increased a community's likelihood of having Ebola infection. Other major contributing factors include: the time it takes one to get treatment when needed, whether representatives from health network organizations were active in the community, whether the community had access to a women's health professional, if fruit was sold at the local market, access to a facility dedicated to childbirth, and the community's proximity to a border crossing.

For the village of Peivalor, our model predicted only a 2.2% probability of the community having any cases of Ebola. However, there was in fact at least one unconfirmed case of infection. Inspecting the plot above, the top two factors that decrease likelihood of infection are: (1) Peivalor is a relatively small community of 18 households; (2) the local market does not sell fresh fruit. On the left hand side in red, the top factor that leads our model to predict an increased infection risk was that the community had no person or facility designated for giving birth. The next two biggest factors were interrelated. The member of the community surveyed specified that there were other disasters experienced by the community during the outbreak, but the nature of the coinciding disaster was either not disclosed or was not included in the report.

The village of Oremai was given the highest probability of infection at 97%. All told, this village of 100 households experienced 4 cases of Ebola. Most notable in the diagram, there simply does not appear to be very many factors in this village's favor. The largest factor contributing to our model predicting an infection in this community was that it experienced two major disasters during the same time as the outbreak. The next largest factor was the amount of time it takes for the average community member to get to and from a treatment facility.